Ahead of the Curve: Draper Heads Refine Combine Capabilities 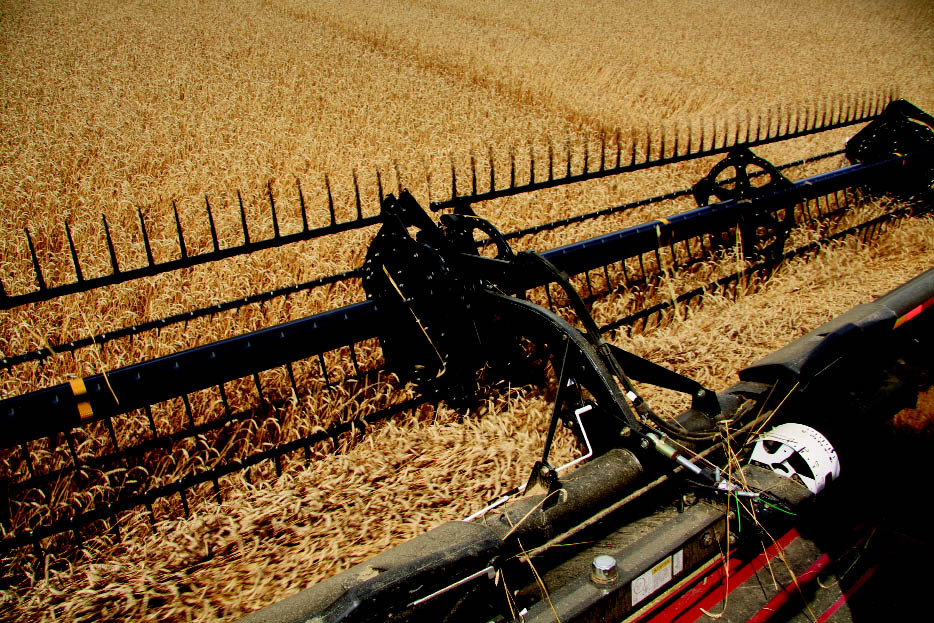 As larger combines are introduced to the North American market, farmers are looking for new header technologies to feed the growing appetites of these huge machines.

As a result, draper headers are gaining favor as a tool to harvest a wide range of crops over a variety of different terrains.

This is because they’re able to feed larger volumes of material evenly into combines, resulting in increased combine capacity and more acres harvested per day. And when the cut portion of the crop can be fed evenly into the combine, this also helps improve residue distribution, reduce grain losses and minimize wear and tear on belts and drivelines within the combine itself.

Jason Strobbe, product manager for MacDon Industries Ltd., headquartered in Winnipeg, Canada, says, “draper heads have taken off incredibly well as a solution to help maximize the performance of all combines. But this is especially true on the larger class 7, 8 and 9 machines.”

He adds, “Our customers frequently tell us they can start harvesting earlier in the day and run longer in the evening as a result of the uniform feeding characteristics that a draper head offers. Draper heads have also been found to work better than conventional heads in short or damp crops, as the draper belts positively convey the material away to keep the cutter-bar clean”.

Draper heads can also eliminate the need for cross-auger, retractable fingers and other similar moving parts because they’re replaced with draper belts. Draper belts are key to increasing combine performance. The Mac-Don FD70 FlexDraper head also offers 2 pivot points on the heads, allowing 3 individual sections to follow the contours of the ground and cut crops like soybeans close to the soil surface.

A 2-section reel, which helps pull the cut material evenly into the draper belts, aids both the cutter bar and draper belt concepts. These draper heads are centrally mounted, which helps when it comes to spreading residue evenly to both sides of the combine.

Many growers will comment that years ago as crop conditions got tough in the evenings, combines could be heard “grunting and groaning” as heavy slugs of material passed through the separation system, overloading belts, drivelines and straw choppers.

More recently, growers have found that draper heads help stretch the work day by allowing them to start earlier and finish later, as a result of the improved crop feeding onto the cross belts and into the feeder house. Evenly feeding material into both rotary and conventional combines helps improve residue distribution.

With conventional headers, each time a heavy, dense slug of material enters the chopper, it slows down chopper RPM and reduces spread width. This presents a big challenge for no-tilling crops into these dense areas of crop residue.

In an attempt to eliminate possible conflicts between the grain cart and the left side of the head, some manufacturers build and sell heads that are offset to the right of the combine feeder house. While the design appears to be a sound one, some producers have found it presents residue distribution challenges, especially if the combines are working up and down the field.

When working up and down, the offset head produces a pair of combine passes that are close together, followed by a pair that is further apart. Because the combine chopper/spreader is limited in terms of how far it’s capable of throwing material to each side, this results in alternating heavy and light residue areas parallel to the combine passes.

Most producers don’t want to cut round and round a field, but this may be the only way to get acceptable residue distribution with an offset head.

Dealers are critical in promoting and marketing specialized products like draper heads. “It takes dedicated dealers,” Strobbe says, “and we have some very strong ones in many regions of the U.S. like the Ohio Valley.”

Another benefit of the draper heads is they can be easily converted to fit on most brands of combine, by switching the adapter plate. “Adapter plates with specialized components for specific combines cost in the range of $3,500-4,500 plus dealer assembly, and also help increase the resale value of the headers by allowing them to be converted to different brands of combines,” says Strobbe.

Ahead of the Curve: Choices Emerging for Narrow-Row Corn Harvest

Ahead of the Curve: 'Autonomous' Tractors are on the Horizon