By Dave Kanicki posted on February 21, 2018 | Posted in Manufacturer News

Concerns about the increasing cost and growing demand for steel is getting the attention of farm equipment manufacturers. It was a subject of conversations at the National Farm Machinery Show in Louisville last week, and at least two industry analysts issued notes on the subject after visits with the major equipment manufacturers at the show.

One manufacturer who is experiencing increased steel prices told Farm Equipment that he’s being told that construction of the Dakota Access Pipeline is consuming large quantities of steel in addition to the other factors affecting prices.

This situation could be exacerbated by recommendations that the U.S. impose hefty tariffs or quotas severely restricting imported steel and aluminum, according to a Feb. 16 report from The Hill.

“Commerce Secretary Wilbur Ross told reporters that his department's investigations found that imported steel is a threat to national security and recommended at least a 24% tariff on all steel imports from around the world under a trade law called Section 232."

The report highlights a number of options for President Trump, who could also decide to not take any action. The President has 90 days to decide a course of action and his decision is not subject to Congressional approval. 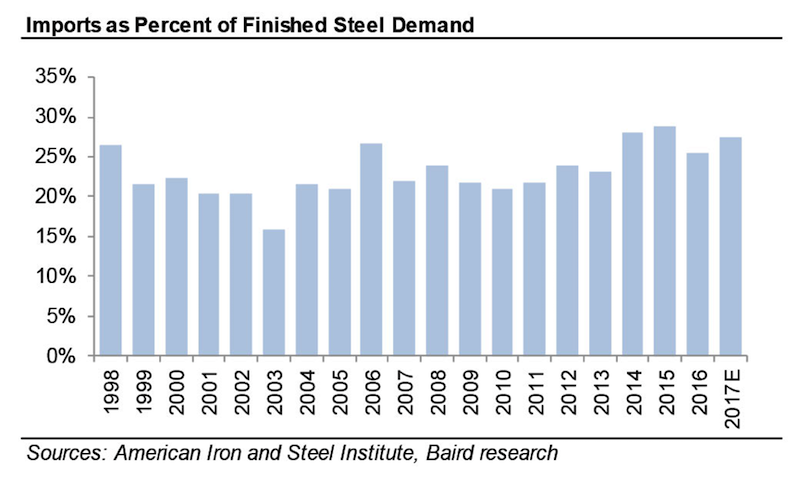 In a note to investors, Mircea (Mig) Dobre, analyst with RW Baird, explains, “Imports have played a growing role in meeting U.S. steel demand in spite of repeated attempts by the U.S. government to limit import penetration. The reason for this is simple: foreign steel is cheaper and we’re not just talking about China, we’re talking about everyone.”

Terry Flanary, branch manager of National Tube Supply Co.’s Baytown, Texas, facility, says, steel availability is very tight with lead times continuing to move out.  As a result, pricing is climbing with the belief that they will continue on this path through 2018.

“One reason for this is the section 232’s that have been filed. Even though these have not been finalized completely, the initial reports indicate that 12 major countries will be hit with tariffs of around 50%. This includes most of the Asian countries, as well as India. The majority, if not all of these mills, have anticipated a similar ruling and started raising prices when the filings happened initially,” says Flanary. “This coupled with the fact that demand has been strong since the last quarter of 2017 has made the perfect storm for the mills as they are booked up in spite of the price increases.”

Dobre illustrated the impact the proposed tariffs would have on machinery pricing using OEMs Oshkosh Corp. and Caterpillar as examples. “We estimate steel accounts for about 12-15% of machinery COGS based on listed machine weights, estimated breakdown of cost elements (i.e., engines vs. transmission vs. axles) and reported financials, a hypothetical 20% increase in steel costs would need a 2–2.5% equipment price increase as an offset.”

According to Dobre, the proposed tariffs are not good policy and in the near-term steel tariffs produce “zero winners” in the machinery space. “Many prior administrations tried tariffs/quotas, yet import penetration continued growing; the reason is simple, foreign steel is cheaper,” says Dobre. “Additionally, the policy seems aimed at China yet steel imports from China are small and declining, when accounting for the impact on U.S. steel buyers and potential trade retaliation it’s hard to see any upside.

“Artificially inflated input costs put U.S. machinery at a disadvantage vs. global peers, but this is not new — since 2010, domestic U.S. steel prices have been meaningfully higher than other countries — the average U.S. domestic steel price premium over the past 6 years has been 29% (perhaps not surprisingly, the premium approximates the 24% global tariff the DOC is recommending), over time U.S. machinery OEMs have found ways to cope and thrived,” Dobre adds.

No One In Ag Wins with Steel Tariff