Bolstered by strong sales to the livestock segment of the industry, sales of compact and mid-range tractors were among the few bright spots for farm equipment sales in 2014. Overall, sales of tractors 40 horsepower and lower were up for all of last year by 6.8%, while those in the 40-100 horsepower range rose by 8.9% year-over-year.

Through June 2015, sales in these tractor categories, though down somewhat vs. the same period of last year, are still in positive territory. During the first 6 months of this year, sales of compact tractors are up 2.7%, while mid-range tractor sales increased by 1.1%.

While grains prices have seen a welcome bump up in the past month, the livestock segment of the business, particularly cattle, continue to hold the best potential for ag equipment dealers.

In its most recent assessment, Rabobank says, though fed cattle prices slipped somewhat recently, it expects prices to pick up through the rest of the year.

In its Beef Quarterly report for the third quarter of the year, Rabobank says, U.S. fed cattle prices are in a state of seasonal transition. “Prices eroded from a spring high of $170/cwt to $155/cwt in early June. At the same time, the market is starting to give increased consideration to the limited availability of market-ready cattle for the second half of the year. Fed cattle prices are expected to find a summer low in the $150/cwt to $155/cwt range, and they are currently expected to recover into the mid- to high $160/cwt range later in the year.” 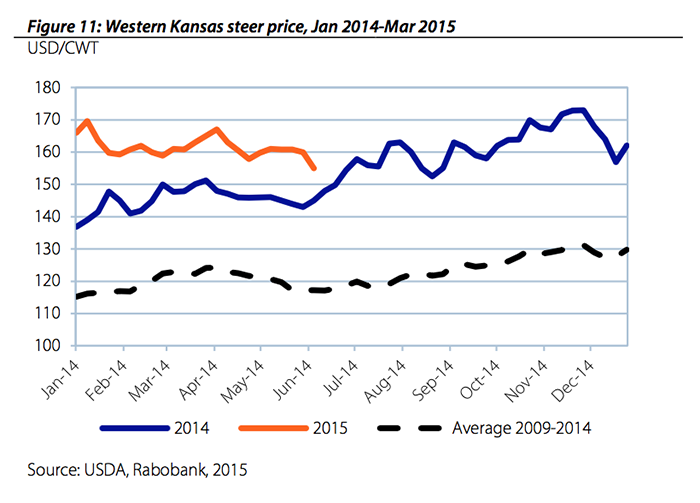 A Comeback for Hogs?

“However, higher prices for substitute animal proteins — mainly beef — should provide some support for the domestic pork market. Prices of live hogs (51-52% lean) are expected to average $53-$55/cwt for the third quarter, $45-$49/cwt in the fourth quarter, and $50-$51 per/cwt for the year,” says USDA.

It adds, “Lower domestic pork prices in the second half of 2015 relative to 2014 could potentially spur increased demand for U.S. pork abroad despite the underlying strength of the U.S. currency.”

While some analysts are expecting some pick up in corn and soybean prices during the remainder of the year, it’s not expected to be enough to kick start the sales of big farm equipment. On the other hand, smaller and mid-size equipment should be helped along with another strong showing of the cattle segment.