With the downturn in ag equipment sales revenue in the past year, Titan has been focusing on reducing equipment inventories, improving cashflow and strengthening its balance sheet, and how these efforts will impact the company’s 2016 fiscal year performance. 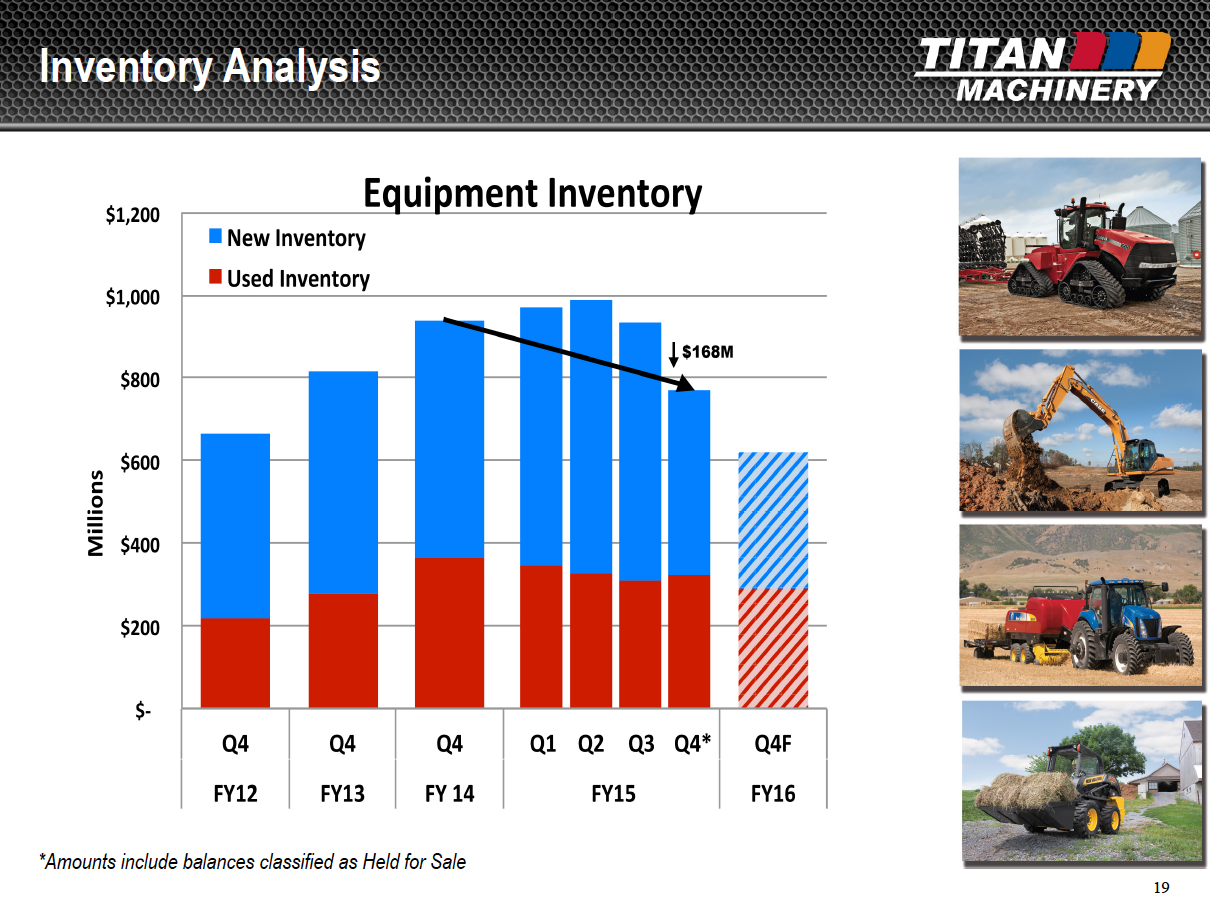 In the past year, Titan has managed to reduce its year-end new and used equipment inventories by $168 million compared to the fourth quarter of fiscal year 2014. “The amount of our inventory reduction for fiscal 2015 represents a significant improvement, but was short of our previous goal due to the lower than anticipated fourth quarter equipment sales,” says Kalvoda.

““We anticipate a further $150 million reduction in fiscal 2016 and expect the quarterly inventory stocking trend to be similar to that of fiscal 2015, with most of the reduction occurring in the fourth quarter.

“We were able to decrease our used inventory in fiscal 2015 and will continue to focus on moving used equipment in fiscal 2016.”

When it comes to pricing, Meyer says it has held up pretty well despite the falloff in sales. “We are seeing some fairly good stability in the pricing of new, which actually benefits some of the late-model used. We really started addressing the used equipment inventory in the third quarter of calendar year 2013, trying to get out in front of it,” he says. “I believe we are ahead of the game and have been proactive in getting our inventories in line with the markets for both new and used.”

He adds that there is some pricing pressure in some equipment categories, while demand for others is keeping prices in line. “Some of the 3rd and 4th generation trades are holding their values pretty well. There is definitely less overall demand for used. This, combined with the oversupply of used across North America is putting pressure on used margins.

“We have done a good job managing through the current cycle we are in. Like the rest of the industry, we sold less new in our fourth quarter, so there were less trades coming in. I feel good about our current inventory position. We are in better shape than much of the industry and feel confident in our ability to manage through this current year.”

The $168 million in inventory reduction was actually lower than Titan’s target, but at the same time the company managed to generate more cash than its original projections of $60-$80 million. “Even with the lower sales, we still ended up beating our original target for cash from operations of $60-$80 million. As we progressed through the year and realized sales were going to be lower, we brought the target down to $40-$60 million,” says Kalvoda. “But we still ended up even beating that original target of cash generation. The reason for that is not only did we get that cash out of this $168 million of inventory reduction, but other working capital as well, such as excess parts inventory, accounts receivable and other current assets. We were able to manage overall working capital down to achieve $82 million in adjusted cash from operations.” 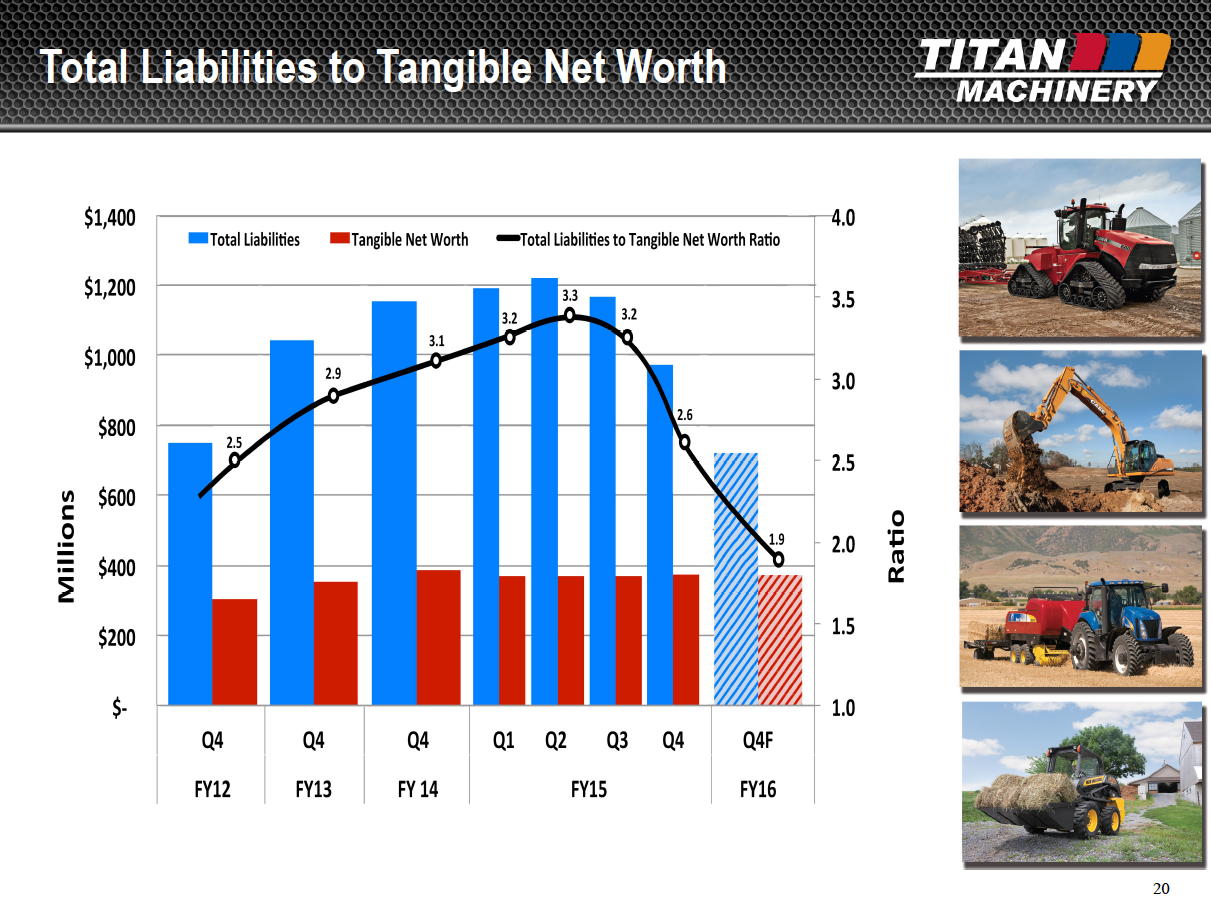 “So we really exceeded the high end of our range by $22.2 million,” adds Meyer. With that, the company is working to strengthen its balance sheet which is typically measured by comparing total liabilities to total tangible net worth.

Charting this ratio over the past 4 years indicates Titan has seen a notable improvement from a high of 3.3 in second quarter of fiscal year 2015 to 2.6 at the end of that fiscal period.

“Based on a consistent level of tangible net worth, we expect to further reduce the ratio to approximately 1.9 at the end of fiscal 2016,” says Kalvoda. “The improvement in our fiscal 2016 total liabilities to tangible net worth ratio primarily reflects our anticipated cash generation and the use of this cash to reduce inventory financing.

“Given the current market conditions, particularly in the ag sector, we believe, using a portion of our cash to deleverage our balance sheet, positions the company to capitalize on long-term opportunities. Generating substantial cash and significantly reducing liabilities certainly makes our lenders comfortable as the industry faces these headwinds.” Kalvoda also noted that the company is in compliance with all of its bank covenants.

To put current cash position into perspective, Meyer says that at the end of January, Titan Machinery had a $128 million cash balance. Spread across the group’s 108 locations would mean that each of its stores is sitting on nearly $1.2 million. Meyer asks, “How many single store dealerships do you know that have a million dollars of cash in their checking account?”

Taking this a step further, looking at Titan’s used equipment inventory of $332 million spread across its 108 stores, and the numbers don’t seem so overwhelming, either.

“It’s a little over $3 million in used inventory per store,” says Meyer. “If you look at this on a per-store level, an average size store can put their arms around this type of used inventory number.”

Titan management isn’t expecting a significant turnaround in ag equipment business levels during its upcoming fiscal year, which began on Feb. 1, 2015. Given the recent market fluctuations, the company’s guidance consisted of its modeling assumptions rather than specific total company outlook ranges for revenues and earnings per share.

According to Kalvoda, Titan assumptions for 2016 calls for ag same-store sales to decline 20-25%, which reflects lower anticipated results from equipment revenues and a slight decrease in revenues from parts and sales. It expects its construction and International same-store revenues to be flat.

Modeling assumption for equipment margins for the full-year is projected to be in the range of 7.7-8.3%. “We expect to be profitable on an adjusted diluted earnings per share basis for fiscal 2016,” says Kalvoda.

Asked about his outlook for acquisitions in the year ahead, Meyer says the opportunity is probably better down the road than in the near term. “Our main focus right now is hitting our revenue targets, expense reduction, reducing inventory and growing our cash. Down the road there is going to be some consolidation, but we think our ability to do a good job with quality acquisitions is going to be dependent on getting our balance sheet in great shape putting us in the position to capitalize on these opportunities.”