A little over a year ago, Jim Tibbles, executive vice president of Osmundson Mfg., a manufacturer of tillage tools in Perry, Iowa, told us that he believed softening ag equipment sales in 2014 would represent a return to normal levels rather than a falloff.

“We talk about a softening in farm equipment, but what it’s really doing is ‘normalizing,’” Tibbles says. “With high commodity prices and depreciation rules, it was crazy for American farmers to not invest in their machinery in recent years. Commodity prices are going to normalize; it will be somewhere between the $4 corn we’re at now and the $7 peak.”

Looking back, it would appear that Tibbles was right on the money. At the same time, compared with farm machinery sales the past few years, it’s easy to see why most industry observers would view 2014 sales levels as a significant drop-off.

The Assn. of Equipment Manufacturer’s North American unit sales for each tractor category, as well as for combines, show that 2014 sales were as good as or better than their 5 and 10 year averages. 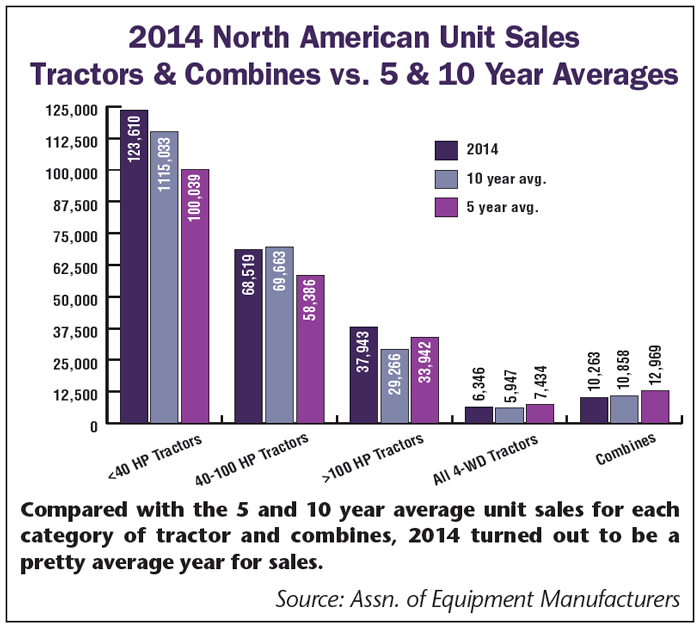 Combine sales is where the dropoff was most evident. Unit sales of combines in 2014 were down about 5.5% compared with the 10 year average and down 21% vs. the 5 year average.

In a note to Ag Equipment Intelligence, one large Canadian dealer may have summed up last year’s sales levels best: “While crop prices are affecting sentiment at the farm, we have had a pretty good year overall. It is easy to forget how good the past few years have been going when we compare to the last year. We should remember that we have had double-digit growth for the past 5 years, so flattening out, or some decrease in sales, should not be unexpected.”