WILLIAMSBURG, Iowa — Kinze Manufacturing, Inc. continues progress on the world’s first large-scale, truly autonomous row-crop solution, with three farmers successfully using the system and testing new functionality in fields throughout Illinois this fall. Based on feedback from farmers testing the system since 2012, Kinze added new functionality this year, including the ability to run multiple combines and autonomous carts in the field simultaneously. 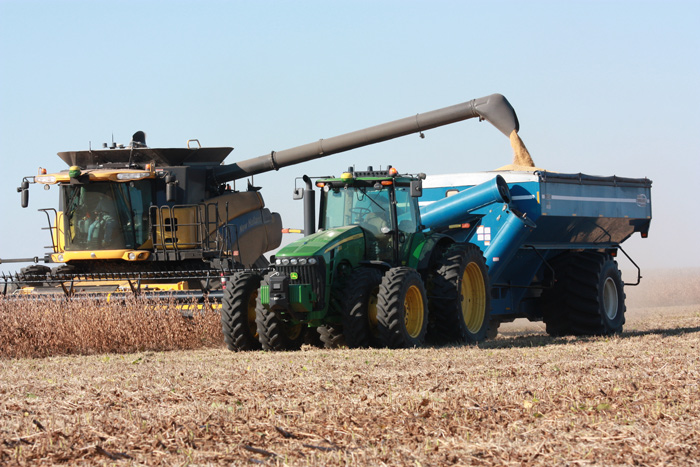 The autonomous system automatically chooses from the multiple carts in the field the one that is most appropriate for the combine operator to unload into when he or she makes a request for a cart. The system also keeps tabs on all the vehicles operating in the field so that the autonomous grain carts always take the safest and most efficient path to the combines.

Additionally, side radar sensors were added in 2014, giving the farmer a full field of vision to the left and right in addition to what is happening in front of the tractor. The system can “see” obstacles approaching from either side and can consequently drive safely down narrow corridors. Furthermore, the wireless communication network and path planning software were updated in 2014 for more efficient performance.

“By listening to the farmers and testing the autonomous system on their farms, we get a firsthand look into the features and benefits they find valuable,” said Susanne Veatch, Kinze’s vice president and chief marketing officer. “Our goal is to help increase productivity by allowing the farmer to accomplish multiple tasks at once and eliminate the need for skilled labor during harvest time.”

As Kinze proceeds with its multi-year plan to launch the autonomous harvest system commercially, their priority is to evaluate its performance in many different environments before making it widely available for purchase. The roll out is very deliberate in order to make improvements based on farmer feedback and incorporate features that actual users have requested. Ensuring the system operates reliably in many different conditions will be Kinze’s focus for 2015.