When partners Ryan Speer and Steve Jacob started adopting precision farming technology at Jacob Farms near Halstead, Kan., in 2002, they immediately appreciated the assistance of their precision farming dealer.

“We have been using this technology for more than 10 years and have found that working with a dealer that knows their stuff makes a difference,” says Speer.

They no-till all of their 4,000 acres, half of which is irrigated. Running primarily one brand of farm equipment has helped avoid significant compatibility problems with technology.

They have a Case IH 3320 sprayer with AIM Command and pulse width-modulated nozzle control and use it for cover crop burn down, pre-emergent and post-emergent herbicide, fungicide and occasional sidedress nitrogen applications.

Their no-till 16-row planter has row shut off and variable-rate seeding capability and their 40-foot air drill can variable-rate seed on 15- or 7½-inch spacings. The combine also runs on 40-foot centers. The planter uses a Case IH AFS 600 monitor that they have had since 2010, while their new combine has an AFS 700 monitor.

“The software is the same and they are compatible,” Speer says. “The only difference is the AFS 700 monitor is more streamlined than the AFS 600.”

During planting and spraying, Speer says RTK auto-steering makes it possible to run longer days and with less fatigue. 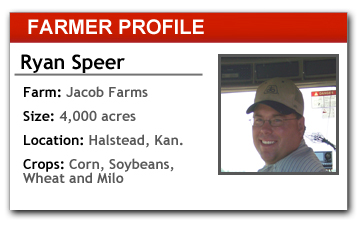 “We have lots of field residue. At night, if you can’t see the row marker mark, you have to quit for the night,” he says. “But with RTK, there is no worry about that.”

The planter also has auto row shutoff and variable-rate seeding ability. These controls help Speer and Jacob reduce seed cost by avoiding double planting areas of the field. When seed corn is $300 a bag, it doesn’t take long to justify that cost, Speer says.

On the sprayer, the RTK-controlled auto-steer system allows the operator to pay more attention to the boom. Swath control on the sprayer saves as much as $10 per acre in herbicide cost, Speer says.

“Although RTK costs more than relying on Wide Area Augmentation System (WAAS) navigation, it is worth it. We follow the same line every time,” he says. “Everything but the sprayer is set up to run on 40-foot swaths, and if we go to a 120-foot boom on the sprayer, we can get the sprayer running on the same rows as the planter and combine.”

While Speer says they’ve had few obstacles in adopting precision farming technology, one challenge has been decoding error codes when technology breaks down.

Cracking the root cause for malfunction messages and codes can take hours, but Speer recalls one instance where having a savvy equipment dealer saved them hours of investigation and trial-and-error fixes in the field.

“One time we got a message that the auto-steer wouldn’t lock in because it sensed motion in the steering wheel. I knew there was no movement in the steering wheel and I had no clue where to start looking,” Speer says. “I called the dealer and within 30 seconds they identified which wire to check for a short or a dirty or loose connection. I pulled that connection, cleaned it and plugged it back in.

“Within a minute, we were able to solve the problem. Without the dealer’s advice, it would have taken us hours. A good dealer prevents a lot of headaches,” Speer says.

Training an Entire Dealership to be Precision Savvy

Webinar: 10 Precision Farming Mistakes & How Dealers Can Avoid Them