New Tool Gets to the Root of the Matter

A U.S. Department of Agriculture (USDA) scientist and his colleague at Cornell University have developed a new tool for studying how roots take shape in the soil.

The three-dimensional imaging system and software package, developed by Agricultural Research Service (ARS) scientist Leon V. Kochian in Ithaca, N.Y., and Randy T. Clark of Cornell, allows scientists to collect data on root systems faster than ever before, and to study root architecture in unprecedented detail. Root systems play a critical role in crop health, and like any structure, they have their own architecture.

Called "RootReader3D," the system gives scientists the ability to analyze root structures and growth patterns, to compare one root system with another, and to genetically map and explore traits that give plant roots the capacity to reach into the soil and collect water, phosphorous, and other nutrients.

Kochian is director of the ARS Robert W. Holley Center for Agriculture and Health at Ithaca, and Clark is a doctoral student in his laboratory. ARS is USDA's principal intramural scientific research agency, and this research supports the USDA priority of promoting international food security.

Previous systems allowed scientists to take three-dimensional images of root systems growing in gels, but those systems required up to an hour to collect enough data for a single three-dimensional image. With the RootReader3D system, scientists can produce images of more than 100 root systems a day, providing the information needed to conduct genetic mapping experiments. 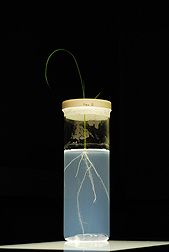 A new tool developed by ARS and Cornell University researchers is giving scientists faster and more detailed looks at three-dimensional root architecture as it develops; here with Azucena rice.

To test their system, the researchers grew two very different varieties of rice, Azucena and IR64, in transparent gels and tracked root growth by imaging the plants and their roots for 10 days. The researchers found that they were able to delineate greater detail in the two root systems than ever before. Azucena had deeper roots than its irrigated cousin IR64, and the two root systems were significantly different in their "bushiness," how their root volume was distributed, and the vertical position of the center mass of the root system.

These results were published and featured on the June 2011 cover of Plant Physiology.

The researchers hope the data they collect using RootReader3D will help scientists identify genes controlling important root developmental traits. The goal is to help plant breeders develop varieties of rice and other crops with roots that make them better equipped to handle drought, heat, poor soil quality, and other stress factors in a changing world.

Read more about this research in the February 2013 issue of Agricultural Research magazine.

Show & Tell is the Secret to Introducing This Tillage Tool