Ziegler has announced that as an approved National FFA scholarship sponsor it has, in cooperation with AGCO, awarded a $1,000 scholarship to Alexis Daggett, a high school graduate from Montello, Wis., for the 2012–13 school year. With support from local FFA chapters, the scholarship program was offered through more than 55 Massey Ferguson, Challenger, and Gleaner dealers across the United States. Ziegler awarded a total of five scholarships this year. 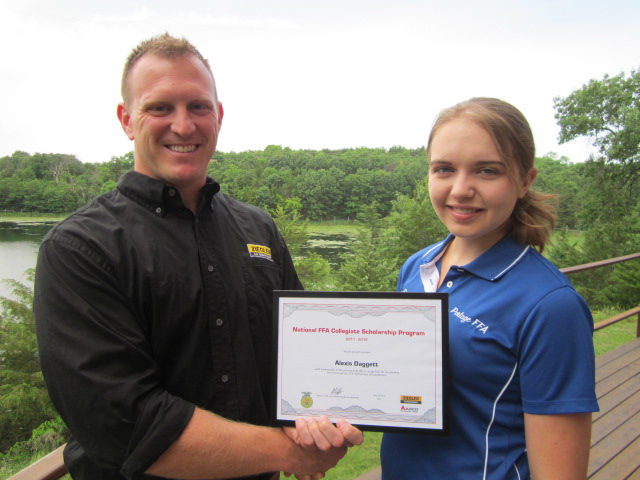 Dick Emmerich, general sales manager, Ziegler Ag Division, said, “We are very excited to be a part of this great new program and assist Alexis in reaching her long-term educational goals. Agriculture is constantly changing and providing new opportunities. There’s no question in my mind that our support of scholarships through the FFA will strengthen the agricultural interests of young people in our communities.”

Scholarship selection takes into consideration FFA involvement, work experience, community service, leadership skills, and academics, and is based on academic records, FFA achievements, leadership, and other school and community activities. Supervised agricultural experience (SAE) programs and future goals are all considered in the scholarship award.

Founded in 1914, Ziegler is a family-owned company headquartered in Minneapolis, Minn., employing more than 1,450 people in 23 communities in Minnesota, Iowa, Wisconsin, and Missouri. Ziegler introduced the first rubber-tracked Challenger tractor in 1987 and is now one of the largest and most successful AGCO and LEXION dealers in the country.