Editor’s Note: This Q&A originally appeared in AG Track Talk to provide answers that farm equipment dealers have about farm track technology. This series features a trending question followed by an abridged version of the answers. For the complete answers, check out www.agtracktalk.com

In the agricultural world there are basically two types of tracks: friction drive and positive drive.

Starting with the friction drive; these are the most common.

A friction drive belt, as implied by its name, is a track that is tensioned to smooth rubber wheels much like a conveyor belt. The tractive force generated for propulsion is the friction between the drive wheels and the roller path of the track.

Positive Drive
The positive drive track is primarily a friction drive belt (most of the time) with metal sprockets that are interlaced with rubber blocks. At the point the friction drive is overwhelmed, the sprocket catches the rubber blocks for a positive engagement without any noticeable difference.

Both Track Types
a. Are similar in construction.
b. Have an integrally wound main cable (zero cable) continuously from one side to the other, for strength.
c. Rubber outer drive lugs for traction.
d. Have a smooth roller path for the wheels to transfer weight of the machine to the ground.
e. Have differing layers of steel and synthetic fabrics for strength in different applications.

Friction Drive Benefits:
a. Fairly simple. Two guide wheels, two drive wheels, a track, and bogie wheels to support.
b. Typically have less problems with the undercarriage.
c. Last much longer as there isn’t as much adverse contact between the components.
Friction Drive Drawbacks:
a. Friction Drive tracks (two tracks) are harder to ballast front to rear with cyclically loaded equipment.
b. Friction Drive tracks lose much of its internal traction when moisture levels are too high (mud and/or water) resulting in difficulty maintaining forward direction or steering at times.

Positive Drive Benefits:
a. More torque to the ground in difficult or high traction situations.
b. Better control maintaining direction and turning in wetter conditions.
Positive Drive Drawbacks:
a. Much lower lifespan than friction drive.
b. Typically more problems with the undercarriage.
c. Drive lugs are the workhorse of this track. Damage to the drive lugs from alignment, material ingestion, or over pulling greatly diminishes life expectancy of the track.

The friction drive and positive drive tracks have unique structural and functional differences that separate their strengths and weaknesses from each other.

Friction Drive Benefits:
The Friction Drive system is driven solely by friction, which gives it a less complicated and cost-effective design.

Friction Drive Drawbacks:
When friction is lacking in slippery or wet conditions, the belt could slip. This is one of the most significant drawbacks of the otherwise reliable design of the Friction Drive. 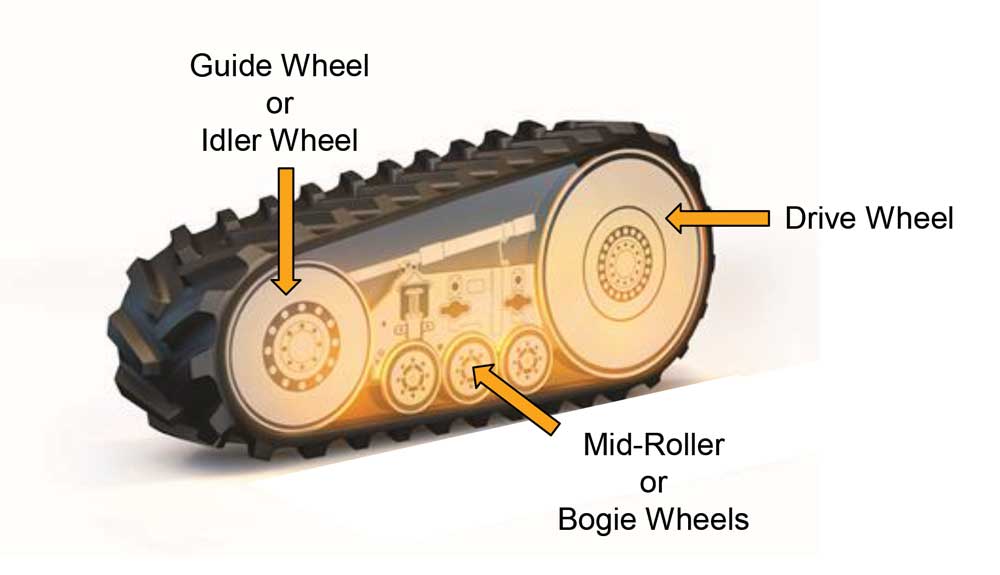 Positive Drive Benefits:
The drive wheel of a Positive Drive system engages with the track drive lugs, preventing track slippage from occurring- this can be a better option when working in a wet slippery environment.

Positive Drive Drawbacks:
The engagement precision required with this set up is more costly. 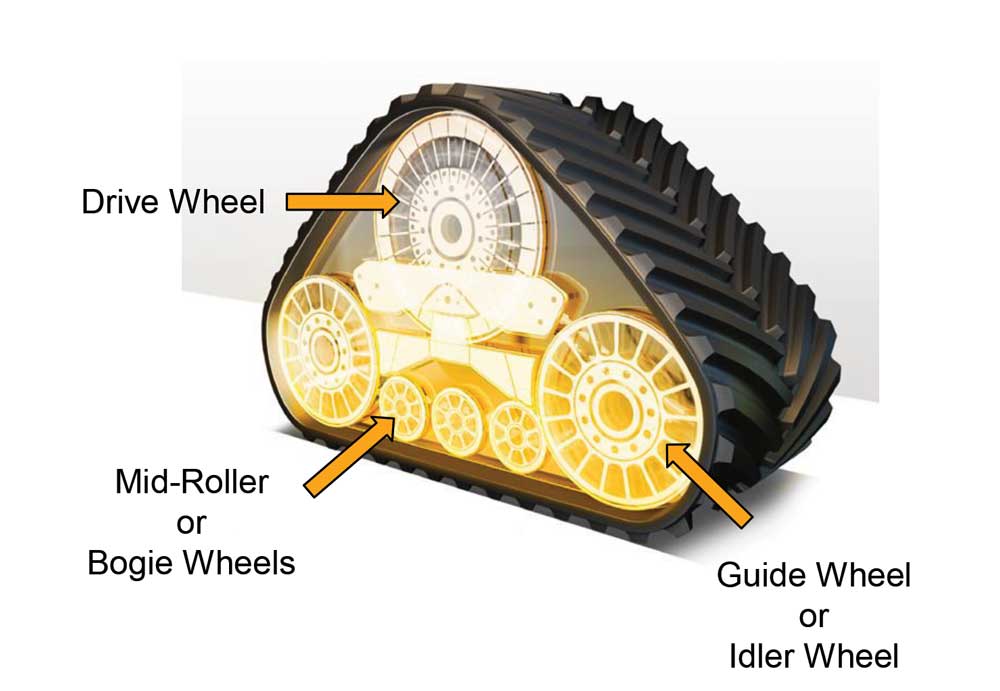 In short, the pros and cons for the particular application must be countered by the investment in order to make the best decision between Friction & Positive Drive Track Systems. James Tuschner has spent 25 years in the tire industry, primarily focused on the agricultural and specialty tire markets. His experience includes time spent at Alliance Tire Americas Inc. (first as director of marketing, then as director of business development) and Denman Tire Corp. He started www.agtiretalk.com in 2016.

How to Check Ag Track Alignment

Compare & Contrast — Making the Case for Tires vs. Tracks