Farmers’ Debt Service Ratio Leveled Off in 2017, Remains Stable into 2018

Despite U.S. farmers taking on more debt in recent years, their ability to pay it down remains steady and nowhere near the situation they found themselves in during the mid-1980s.

The measure used to gauge producers’ ability to make scheduled interest and principal payments on their debt when they are due is called the debt service ratio. It calculates the share of agricultural production used for debt payments. A higher debt service ratio implies a greater share of production income is needed to make debt payments, suggesting lower liquidity (the amount of capital readily available as cash). 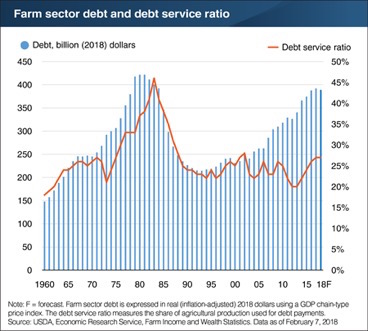 According to USDA’S February 2018 Farm Income and Wealth Statistics report, following record level agricultural production in 2013, the debt service ratio in 2012 and 2013 was at its lowest level since 1962 at 20%. The ratio then increased year-over-year to 26% in 2016. ERS forecasts the debt service ratio to increase slightly to 27% in 2017 and 2018, as debt payments have increased and the value of agricultural production has declined since 2013.

However, the ratio remains well below the peak in 1983 even as farm sector debt approaches levels seen in the 1980s, at about $400 billion. Declining interest rates have helped to keep debt payments low, and the value of agricultural production has increased 38% since 2002, after adjusting for inflation. As a result, the debt service ratio is now near its 2002 value and its 35 year historical average.

Sale of Tractors and Combines in Europe Remains Stable