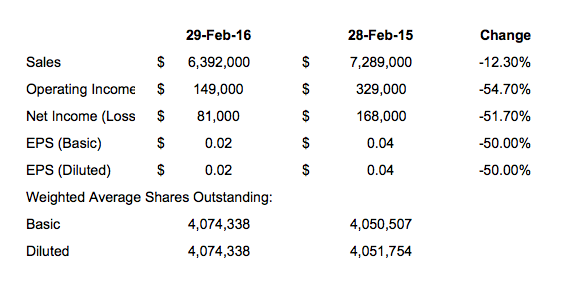 Consolidated corporate sales for the three-month period ended February 29, 2016 were $6,392,000 compared to$7,289,000 during the same respective period in 2015, a decrease of $897,000, or 12.3% decrease year-to-date. The decrease in revenue was primarily due to the decreased demand for our agricultural products that we have been experiencing for the last year. Consolidated gross margin for the three-month period ended February 29, 2016 was 26.6% compared to 28.2% for the same respective period in fiscal 2015.  While we have decreased our fixed costs to more closely match our current demand, decreased revenues are still pressuring our margin profile.

Consolidated net income was $81,000 for the three-month period ended February 29, 2016, compared to $168,000 for the same period in 2015.  The decrease was primarily due to the decreases in revenue described above.

Chairman of the Art's Way Board of Directors, Marc H. McConnell reports, "Our profitable first quarter of 2016 was aided in great part by the impact of streamlining initiatives and other cost-cutting measures we have focused on for many months.  We are pleased with the progress we have made given the challenging environment in several of the markets we serve and continue to focus on improving our business and profitability going forward."