There’s little doubt that the generous Section 179 equipment expensing and bonus depreciation provisions helped boost U.S. farm equipment sales during the past several years. But the provisions expired at the end of last year and limits will revert to $25,000 from the $500,000 level of 2013.

Last month, as reported in Ag Equipment Intelligence’s “On the Record” newscast, the America’s Small Business Tax Relief Act was introduced in the House of Representatives to permanently increase Section 179 expensing levels to $500,000.

The section 179 expense deduction allows business owners, including farmers, to “recover all or part of the cost of certain qualifying property” according to the IRS. Such investments may be treated either as a current expense and deducted from gross farm income immediately, or capitalized and depreciated over time. It can also reduce the upfront cash cost of purchasing new and used equipment. 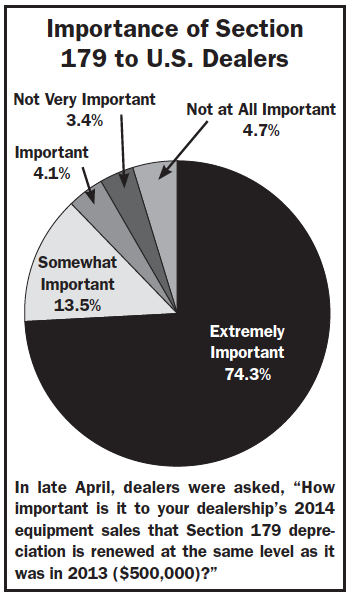 In other words, it gives farmers incentive to purchase new or used machinery to reduce their overall tax burden and replace older equipment. Conversely, limits on capital expensing have been shown to impact farmers’ buying decisions.

According to USDA, unless the 2010-13 expensing limit is extended, it will fall to $25,000 for tax year 2014. This change could increase the cost of capital investment and significantly increase taxable income for some farms.

Based on 2012 ARMS (Agricultural Resource Management Survey) data, while 38% of U.S. family farms reported a capital purchase, less than 1% had expenses exceeding $500,000. Under a $25,000 expensing limit, 13% of farms would have exceeded the limit. Smaller family farms, in general, did not make investments exceeding the old limit, but about 9% would have exceeded the 2014 limit. Very large family farms (those with gross cash farm income in excess of $5 million) were far more likely to have capital costs exceeding both the old limit (35%) and the 2014 limit (78%).

Right now, the chances of America’s Small Business Tax Relief Act passing looks good, but farmers and dealers may have to wait until nearly year’s end before they know for sure.

Nick Yaksich, vice president of government and industry relations for the Assn. of Equipment Manufacturers, told “On the Record” the bill has bi-partisan support and is likely to pass — though it likely won’t occur until after the November elections.

Dealer commentary from recent Ag Equipment Intelligence surveys indicate that farm equipment dealers look at depreciation rules as being critical to their sales levels. One dealer offered, “Crop prices seem to be holding steady. If depreciation rules are reinstated, it would be a boost for the remainder of ’14.”

Another dealer commented, “There is too much uncertainty in the marketplace, depreciation, grain prices, etc.”

A survey conducted by Farm Equipment magazine in late April asked dealers how important is the renewal of Section 179 depreciation at the 2013 level ($500,000) to their sales in 2014. Nearly 90% of dealers who responded said it was “extremely important” or “somewhat important.” 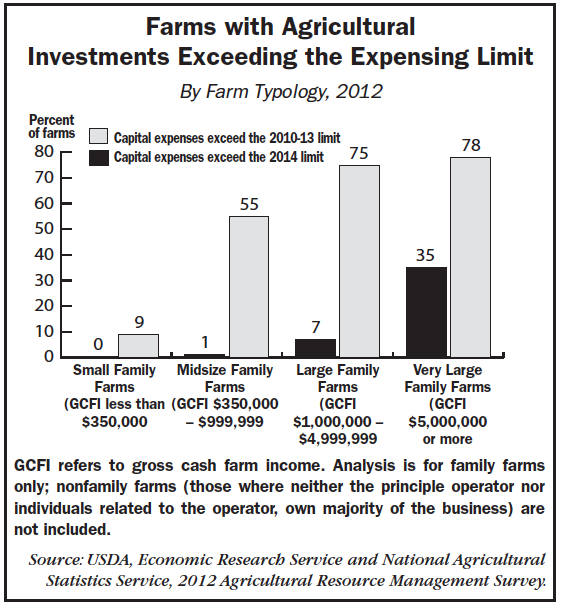 Section 179 Depreciation Renewal Still Up in the Air