Report finds that only 46% of farmers, ranchers use smartphones, but digital news consumption grows.

Digital news consumption by farmers and ranchers continues to grow, but not at the expense of traditional media, according to the 2014 iteration of the ABM Agri Media Council Media Channel Study, which surveys how readers engage with agriculture media. 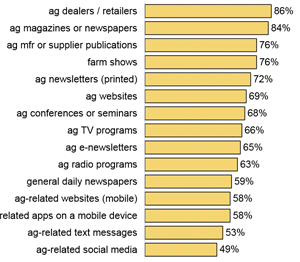 When asked, “What resources will be important in the future?” 86% of farmers and ranchers ranked ag dealers/retailers #1 on their list. Dealers and retailers were closely followed by ag magazines or newspapers with at 84%.

According to the study, digital usage and adoption by farmers and ranchers lags behind b-to-b professionals in other markets. When Readex Research, the commissioner of the Media Channel Study, compared the findings to ABM’s Value of B2B Report, which explored the overall value of trade media, the firm found significant differences.

Respondents of the Value of B2B Report cited digital media channels (websites, e-newsletters and social media) as their top sources of information, while ag study respondents reported more traditional channels (print magazines and print newsletters). When asked about the future importance of various media channels, Value of B2B respondents reported websites, manufacturer info and e-newsletters as the channels that are most likely to remain important in the next three to four years. Ag respondents cited print magazines, print newsletters and manufacturer info as most likely to remain important in the future.

Despite the heavy use and reliance on traditional media, digital media usage is growing with the ag audience. The study reported usage increases in ag websites, ag e-newsletters, ag websites on mobile devices, ag-related text messages and ag-related apps on a mobile device.â€¨â€¨ During a recent ABM/NAMA webinar, Kristi Moss, senior media director of Paulsen Marketing, disclosed that ag marketers are also moving towards digital.

“That's coming for two reasons: We are seeing more [marketers] with consumer experience coming in and relying on the way consumer business is done,” said Moss. “And, of course, I don't think anyone can argue with the ROI component of digital — it makes marketing managers' jobs much easier when they have the proof to forward to the executive management team. "â€¨â€¨But, because of widespread media usage, and ag audience engagement with virtually all media channels, ABM’s Agri Media Council recommends that marketers make integrated buys (print, digital and in-person).â€¨â€¨The full report can be accessed here. ABM's Agri Media Council is offering presentations to interested parties.â€¨â€¨For more information on ABM’s Agri Media Council, click here.

Your Words are as Important as Your Actions