The rapid growth of emerging markets worldwide is creating unprecedented demand for farm machinery, according to the Agrievolution Alliance, a global alliance of agriculture equipment manufacturing associations. 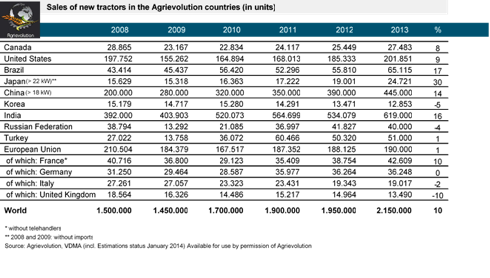 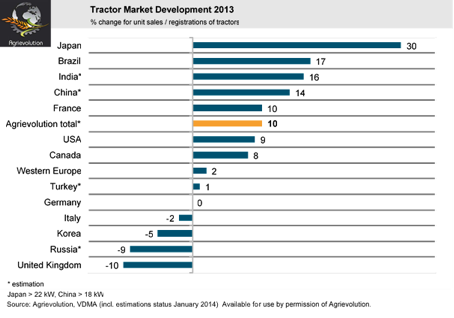 In 2013, according to Agrievolution Alliance estimates, the global market for agricultural tractors grew by 10 % to 2,150,000 units. This high number of new tractors sold represents a great step towards increased mechanization on the farm throughout various world regions — one of the core objectives of the Agrievolution Alliance.

The biggest tractor markets in unit terms were India and China. Both markets increased by around 15% in the past year, to 619,000 and 445,000 units respectively. Both results show new record levels for these countries, although growth rates in China slowed down compared to the enormous development over the past decade. The third country to reach a new peak in 2013 was Brazil, counting more than 65,000 tractors.

Stronger trends also developed in North America, Turkey and Japan. The European market leveled out in the second half of the year, ending the total year figures with a slight increase.

Demand for both tractors and agricultural machines will remain comparably strong in 2014, due to the fact that the farming sector in general is expanding, aiming for higher yields and economies of scale. For most agricultural commodity products, the current price levels paid to farmers are on a satisfactory level, which forms the basis for new investment possibilities.

According to Agrievolution estimates, unit sales in 2014 might remain slightly below the high level reached in the past year, while global sales could remain flat at about $125 billion. Regional development will continue to vary depending on investment needs and market conditions including financing options for the purchase of new equipment.