Current USDA forecasts show declines in U.S. average farm prices for major U.S. field crops—corn, soybeans, wheat, and cotton—of 4 to 19 percent in 2014/15. For corn, soybeans, and wheat, this would be the second consecutive year of declining prices. Soybean prices are forecast to decline the most in 2014/15, based on an expected record U.S. crop, combined with ample supplies from Brazil and Argentina. U.S. corn prices are forecast to fall 10 percent in 2014/15, after a 35-percent decline in 2013/14, also based on a large U.S. corn crop forecast and competition from other exporters like Brazil, Argentina, and Ukraine. U.S. wheat prices are forecast to decline about 4 percent in 2014/15, despite the forecast for smaller U.S. supplies, due to adequate supplies from both traditional and Black Sea wheat exporters. Although smaller cotton crops are forecast for China and India—the top two global producers—a larger U.S. crop is expected to lead to a fifth consecutive year of rising global cotton stocks and a 12-percent drop in U.S. prices in 2014/15. Find additional analysis in the current ERS outlook newsletters: Feed Outlook: July 2014, Oil Crops Outlook: July 2014, Wheat Outlook: July 2014, and Cotton and Wool Outlook: July 2014. 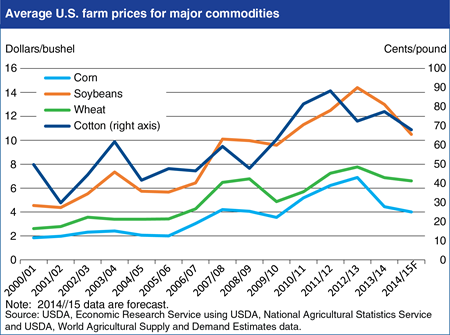