Birkey’s Farm Store hosted a grand opening celebration April 4 and 5 to announce the opening of its new store facility on High Cross Road in Urbana. An estimated 2,000 individuals attended the two-day event.

The celebration began with a ribbon-cutting ceremony at 9:30 a.m. by the Champaign County Chamber of Commerce and the Mayor of Urbana; approximately 200 were in attendance. Throughout the day, customers took guided tours of the building and attended educational clinics on planters, equipment leasing, Advanced Farming Systems, and oil and filter products. Customers also browsed the 47-vendor fair organized by the company. 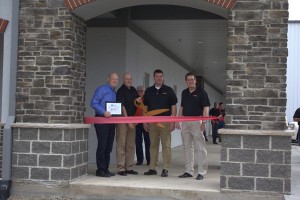 Over 1,200 guests attended the fish fry dinner. During the meal, Regional Manager Jeff Hedge and Store Manager Brian McCoy recognized the store’s 42 employees and presented the general contractor, Drake Homes, with a gift.

“We had a great crowd; it exceeded our expectations. We saw younger customers and older customers who have done business with us over the years — folks who were retired as well as folks just getting started in the business,” says Jeff Hedge. “For some guests, it was almost like a reunion. They could reconnect with people they knew years ago.”

“Walking in the door of our building brought a smile to the faces of the former owners — they take as much pride in the facility as we do,” says Jeff Hedge.

Also during the Friday dinner, CEO Mike Hedge spoke about the company’s 60th anniversary and “Hunger Drive” campaign, which has raised more than $150,000 for local foodbanks. He recognized the eight Parkland College students who restored a 1954 Farmall Super MTA that has traveled across the state encouraging donations.

“The Saturday event gave us a chance to meet neighbors in the Champaign-Urbana community. It was a great turnout. We were very pleased from start to finish — from the ribbon cutting to the vendor fair to the community day,” says Jeff Hedge.

About the New Building

Birkey’s owners toured dealer facilities across the Midwest and worked with general contractor Drake Homes to incorporate the best features into the new Urbana store. The design focuses on safety, efficiency, and a comfortable experience for both customers and employees. The shop has a heated floor, energy-saving geothermal temperature control, and an overhead crane spanning the length of the building that will allow employees to easily move heavy items.

Birkey’s new location is convenient to customers and offers space to bring equipment in and out. Unlike the previous store, the new Birkey’s location will be incorporated into the city of Urbana.

“We are part of the community now and will support it in many ways, including tax dollars,” says Jeff Hedge, Birkey’s Regional Manager.

As Birkey’s unveils a new facility, it also celebrates 60 years in business. The event coincided with the final two days of Birkey’s 60-Day Hunger Drive, a campaign to raise $100,000 for the Eastern Illinois Foodbank and 6 other local foodbanks. Donations over $10 received raffle tickets in a drawing for a restored 1954 Farmall Super MTA tractor, which was on display at the event. Foodbank staff members were also present to answer questions and take donations.

“Our farm and construction customers are helping to feed our world and build our communities. This drive is one way for us to partner with them and carry out this mission on a local level,” says Mike Hedge, President and CEO of Birkey’s.