Home / Blogs / Opinions & Columns / Ahead of the Curve: Tractor/Implement Datalink in the Works

Twenty years ago, farm field speeds were slower and sprayers and other implements were not as wide, nor were they as complex as systems now farming the land. That was the world into which the first control area network (CAN) was standardized as a communication link between tractors and implements.

Incorporated as part of the now-familiar 9-pin ISO 11783 ISOBUS connector, the system was designed to operate at 250 kilobits per second, fast enough to move 2,000 frames (or blocks of information) per second. Engineers were comfortable with the system’s abilities running at 30-40% capacity to meet most of the needs required back then with the ability to operate efficiently at 60% or more of capacity.

“At that time, we were accustomed to working with 3-section controllers. Now we see 12-section systems routinely,” says Marvin Stone. “Today, we’re approaching something beyond the communication capabilities of ISOBUS with more complex variable-rate equipment and the current trend toward much faster field speeds.”

Stone, agricultural engineering regents professor emeritus at Oklahoma State University, was instrumental in the committee of the American Society of Biological and Agricultural Engineers (ASBAE) which began standardizing the current CAN system for agricultural equipment in 1990. While he no longer chairs that committee, Stone is still a member and has watched the development of the need for faster and broader communication between machines in the field. As a result, he is very familiar with the developments underway to meet that need.

“There are several approaches available to engineers and OEMs,” he says. “But, most likely we’ll be seeing a new high-speed Ethernet datalink and connector incorporated with high voltage connectors currently being developed for the next generation of electrified farm tractors and implements.” (See Ahead of the Curve, Farm Equipment, March 2015.)

“We’ve been working with these applications since before CANBUS was invented, so we’re now into the fourth generation of this technology,” he explains, referring to PinPoint. “We’re communicating in real time with our networks and our sprayers, and have 72 or more nozzles stretched out over 100-plus feet. Our machines are traveling at 15–20 mph. Plus, we have other sensors and valve controllers in the system, and we’re operating at one-meter resolution — requiring a control signal and a return ‘as applied’ signal roughly every 3 feet of linear movement.

“We’d love to be able to plug into a virtual terminal (VT) and have our screen on an ISOVT, but because of the lack of bandwidth and data transmission speed in today’s CANBUS system, we’re relegated to very course graphics. If higher speed systems are made available, we’ll be able to do many things with terrific terminal graphics and maps,” he added. 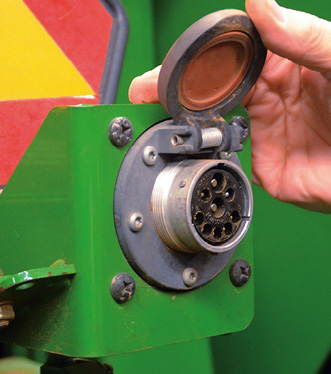 Today’s ISOBUS connector is likely to remain a fixture on the rear of U.S. tractors in coming years, but it probably will be accompanied in the future by a much faster Ethernet connector. 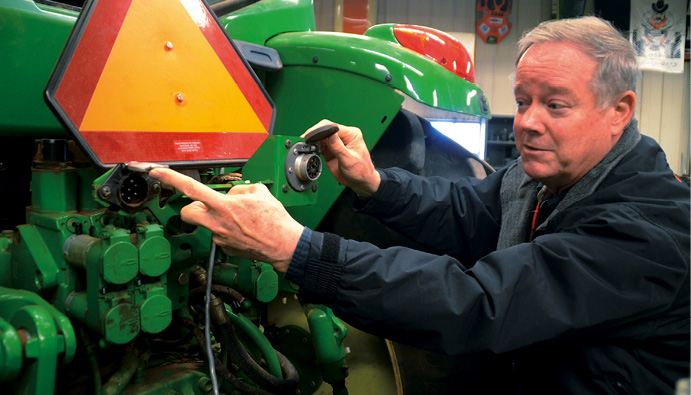 Currently, he notes a number of designers are getting around the existing CANBUS speed and bandwidth limitations by running multiple CANBUS circuitry to split up the communication chores of today’s complex systems.

Grimm says the company’s product development research shows that vendors and end users want to move to half-meter resolution for even more precise application. He cites the example of a producer who wants to spray herbicide near a waterway in a field and doesn’t want to burn the edges of the grass. Such an application would require a full-field map and very high resolution to keep the spray out of the waterway perimeter, he says. “That would mean quadrupling the amount of data we have to handle in the same time interval,” Grimm adds.

Stone says the following example shows how limited today’s ISOBUS CAN system has become despite its ability to move 2,000 frames of information per second.

Consider a 90 nozzle sprayer with each nozzle requiring 5 messages per second and you realize that requirement, alone, accounts for 22.5% of the system’s capacity.

Add a real-time map to the equation and the CANBUS will be running at roughly 60% capacity. “If you increase forward speed, the numbers of messages generated by the nozzles to change spray rates and to confirm rates ‘as applied’ will increase,” he says. “Similarly, as you make a turn, the outboard end of a spray boom will nearly double its speed compared with the ground speed of operating in a straight line. This significantly increases the number of messages generated by the sprayer during the turn.

“Once you add boom-height control and a terminal graphics display and account for various priority messages that might be generated by malfunctioning spray nozzles or liquid level problems in the sprayer reservoir, it’s obvious the system is approaching its limits,” Stone suggests.

Stone says, while he’s not on the task group charged with setting standards for the new datalink, it’s highly likely members will turn to an Ethernet connection to add capacity to the next generation of tractors and implements. He envisions a datalink classification system for future farm equipment much like the one that governs today’s hydraulic systems and hitches.

“There is already a Class I, II and III in the standard for varying levels of electronic communication between tractors and implements,” he says. “Right now, however, I don’t know of any Class II or Class III systems in the field.”

The class, or category system, will allow equipment buyers to know if they purchase a tractor equipped with a Class III datalink, it would be capable of interfacing with any Class III implement, or implement of any lower capacity class, says Stone.

Today’s CANBUS connection operates at 250 k/baud and the Ethernet is rated at 10 mega/baud — 40 times as fast.

“Speed isn’t everything, however,” Stone cautions. “While the CANBUS is admittedly slower, it is capable of accurately moving data according to priorities, whereas the Ethernet presents some significant engineering challenges to do the same thing.

“Because of that, I think we’ll see a move to maintain the CANBUS and provide Ethernet also, with the on-board tractor computer determining which system to use for various applications.

“The configuration would likely include a high-speed datalink and Ethernet system included in a high voltage electrification connector. Nearby, would be the traditional ISOBUS connector with its CANBUS system. In the future, probably for a minimum of 20 years, that system would work in tandem on new tractor and implement combinations,” he explains. “As more electrification takes place, you’d also likely see fewer hydraulic fittings at the rear of the tractor in the U.S.”

Ahead of the Curve: Small Tractor OEMs Embrace Tier 4

Ahead of the Curve: Ag Robotics: Thinking in Smaller Chunks