USDA’s August 10, 2012, World Ag Supply & Demand Estimates (WASDE) confirmed what farmers, dealers and manufacturers already knew: overall 2012 will be a lousy year for crops, but fairly decent for farm incomes due to rising commodity prices and increased use of crop insurance.

After studying the history of equipment sales following a difficult weather year for farmers, Robert McCarthy, machinery analyst for Baird Equity Research, says that while many industry observers are comparing this year’s weather impacts to similar events in 1988, the “2012 drought is more like 2002 than 1988.”

In an report to investors, McCarthy said, “Drought impact appears moderate, but 2013 ag equipment volume is likely to see slight decline. We forecast that the current drought’s impact on crop income will be largely mitigated by crop insurance (using 2002 as a template) and higher crop prices. We continue to expect low-single-digit growth in equipment volume in 2012, followed by a mid-to-high single-digit decline in 2013.

As expected, when it issued its latest estimated forecast for crop yields and pricing, USDA lowered the projected per-acre yields for corn and soybeans and raised its forecasted per-bushel pricing.

According to McCarthy, 2012 appears to be one of the most difficult farming years experienced in the last three decades, with some comparing current conditions with the 1988 drought, which in itself has been the worst drought since the Great Depression. “The comparison likely stems from a look at the percentage of the U.S. experiencing drought conditions (35%), which is actually slightly higher than 1988’s 33.6%,” he says. 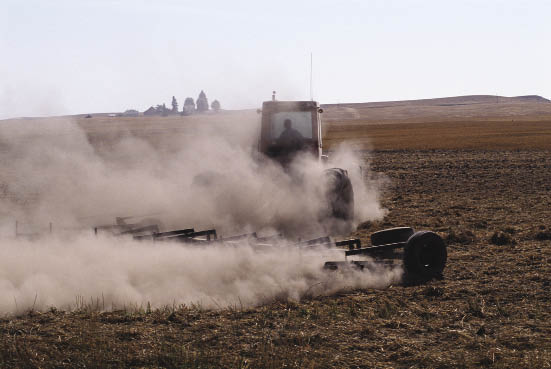 “Dusty dry,” is how some Midwest farmers are describing their fields as a result of the 2012 drought. The uncertainty of crop yields is causing a significant num- ber of growers to postpone planned equipment purchases and others to consider changes in their equipment and farming practices.

“Recent crop progress reports also support the idea that 2012’s drought is actually closer in intensity and damage to 2002 than it is to 1988,” he says.

“Using 2002 as a guide, impact on net crop income appears manageable at this point. Using historical crop harvesting and yield data combined with current planted acreage, price and farming cost structure, we estimate the impact on Big 3 (corn, soybeans and wheat) cash receipts will likely be muted (down about 1%), while crop income is estimated to decline about 29% before crop insurance indemnities.”

McCarthy points out that both 1988 and 2002 did not result in significant, protracted declines in equipment volumes. “We forecast very low-single-digit growth in volume in 2012, followed by a mid-to-high single-digit decline in 2013.”

In his analysis, McCarthy asserts that crop insurance is a far more popular risk management tool than it was in 2002 or 1988. He says, Secretary of Agriculture, Tom Vilsack, estimates that roughly 85% of today’s farmers have crop insurance, compared to just 25% in 1988. The USDA Farm Program Atlas data shows that during 2009, the most recent data available, 90% of planted corn acres had some level of crop insurance, with 87.5% for soybeans and 96% for wheat.

In fact, according to the Federal Crop Insurance Corp. and the USDA, total crop insurance liabilities have grown from roughly $20 billion in 2001 to $102.6 billion in 2012. “Some of the increase is related to higher overall commodity prices, however USDA is also pointing to improved coverage,” he says. 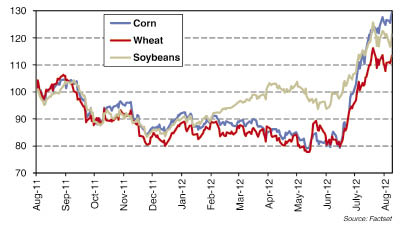 “In 1988, sales of tractors over 40 horsepower increased 7.6% after a prolonged period of decline in the early 1980s, while combine sales decreased 16.6%,” McCarthy reports. “During 2002, sales of tractors over 40 horsepower declined 5.7% with combines declining a more meaningful 21.6%. Importantly, tractor sales increased the following years — in both 1989 and 2003 — while combine sales only increased in 1989.”

[Podcast] How Will Continued Drought in the Southwest Impact Hay Prices and Equipment Sales?