Vermeer Unveils the Next Big Leap in Baling Technology

The first-ever self-propelled round hay baler is expected to revolutionize haying operations for big producers.

Since Gary Vermeer invented the round baler in the early 1970s, the evolution of hay baling operations has been marked by a series of refinements that have vastly increased productivity of the operation and quality of the final product.

Vermeer Corp., the company that Gary Vermeer founded, unveiled the next giant leap in haying productivity and efficiency with its development of the first-ever, self-propelled baler. But Vermeer’s ZR5 prototype baler goes beyond merely having its own engine, and provides a clear vision of where haying and baling operations are heading. The company launched the ZR5 at Husker Harvest Days in Nebraska on Sept. 13. A few weeks earlier, the company demonstrated the new machine to a group of Nebraska farmers.

According to Josh Vrieze, Vermeer’s product manager of Forage Solutions, the new baler was developed to improve the overall efficiency and productivity of baling operations. By eliminating many of the steps typically required by an operator driving a tractor and pulling a baler. They say this new approach results in greatly diminishing operator fatigue.

Operating with a 173 horsepower engine, the unit is totally self contained and designed to operate much like a zero-turn mower for increased maneuverability in the field. A second steering mode locks the front wheels for stability when driving on the road. “We have a field mode where the casters on the front are free to spin around and it allows you to zero turn the baler into the next windrow without having to make a big wide turn like you would normally with a tractor and baler.

“The other mode is for transport where the casters are locked and the machine can travel up to 30-plus mph. So you’re able to go from field to transport mode and feel confident on how the machine is going to act in both of those conditions. This is very important especially for those who have smaller fields and spend a lot of time on the roads,” adds Vrieze.

The cab of the ZR5 is placed over the unit’s suspension rather than set back over a solid axle, which Vrieze says allows operators to feel the full stroke of the suspension, improving their comfort and their range of view. With the use of various cameras, operators have full view of the pickup and tailgate of the machine, eliminating the need to continually look back to monitor the baling operation.

“The way the camera is positioned allows the operator to look up into the throat of the baler, as well as watching how the bale is ejected,” says Vrieze. “This also greatly reduces operator fatigue, allowing him to work longer.”

He also points out that the full suspension allows for higher speeds in the field during the actual baling operation. “You are no longer limited to how fast you can go and stay in your seat. The baler itself is the only limiting factor.”

Vermeer Corp. discovered that if it was going to continue the legacy of its founder, it would need to step outside of its traditional approach to research and development. Gary Vermeer is credited with inventing the first round hay baler in the early 1970s before anyone suggested that agriculture needed a new approach to baling hay. 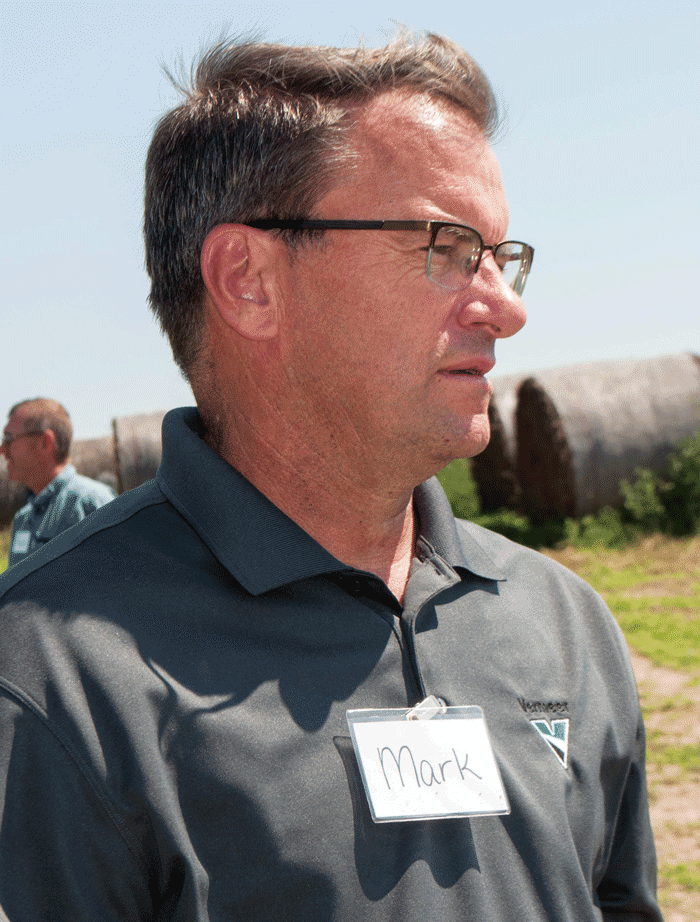 According to Mark Core, Vermeer’s executive vice president, forage and lifecycle and chief marketing officer, the company created a separate R&D group called Forage Innovations. “Their focus is on things that don’t exist in the marketplace today vs. our other product development group that focuses daily on bringing better balers, better mowers and better rakes to market. But our Forage Innovations team it is an interesting balance because we know we are going to be testing some concepts that aren’t initiated by our customers.”

This approach could be likened to Lockheed Martin’s Advanced Development Programs of the 1940s that resulted in some very innovative aircraft designs. It was dubbed “skunk works” at some point and is widely used throughout business to describe a group within an organization given a high degree of autonomy and unhampered by bureaucracy, with the task of working on advanced or secret projects.

Core says the development of the ZR5 self-propelled baler is a result of this autonomous approach. Whereas a lot of the company’s developments over the years came from comments, suggestions and frustrations of its customers, this wasn’t the case with the new baler.

“We want to take a hard look at needs that have been taken care of over time that people didn’t know that they wanted,” Core explains. “When Gary Vermeer invented the round baler, I don’t think anybody asked him for a large round package they could store outside. He recognized his customers’ concerns about labor and their need for efficiency. I sure wish that Gary Vermeer was here today, because we believe development of the ZR5 self-propelled baler is certainly the next step for our brand, our dealers and, most importantly, our customers.”

Core uses the taxi service Uber as an example of how creation of the ZR5 came about. “I’m a big fan of Uber. There are about 5 or 6 things that I really like about it, but I would have really struggled articulating these reasons 2 years ago about what I wanted that would be better then normal cab service.

“And that’s the world that we’ve created here; bringing products to market that meet unarticulated needs that our customers struggle with each and every day.”

At the same time, Core says the initial market for the ZR5 are custom operators or big hay producers who operate 2, 3, 4 or more machines. “They didn’t tell us they wanted a self-propelled baler. But have told us they struggle with getting qualified labor to be able to run that many machines. They tell us they struggle trying to get all their customers hay done in a short window. So high productivity and efficiency are critical to them. We believe they’ll also appreciate the additional technology and extra features on this machine. Over time we certainly hope the technology is adapted by a wider group of professional hay harvesters like it has been with other self-propelled equipment.”

Core estimates the company will have these machines ready for market in 2019.

The placement of the cameras is one of major reasons why the ZR5 represents a significant breakthrough in haying operations. As Vrieze explains, “If you watch someone bale hay, you see there is a lot of turning around and looking at the pickup and seeing where the driveline is while steering the baler.

By having everything built into one unit and placing the cameras in strategic locations, the operator is no longer turning around, no longer bending his neck. The camera monitors, both for the pickup as well as for the tailgate, are right in front of the operator so he can see what’s happening without constantly turning his body.”

He adds that if you think about someone who is bailing several hundred bales per day, that’s several hundred movements you’re really eliminating by allowing him to look straight ahead, watch the monitors in front of him and only concern himself with the windrow.

One of the most unique features of the ZR5 machine is, when the bale is ready for unloading, the machine stops and automatically makes a quarter turn to unload the bale.

As soon as the bale is fully unloaded, the operator pushes a button and the unit turns back into the windrow and automatically starts producing the next bale.

The quarter turn allows for the bales to be lined up in identical fashion, which helps simplify the task of picking them up and loading them for transport. Vrieze estimates this feature alone increases the efficiency of picking up the bales by as much as 35%.

This unit also has a “hillside option,” which allows bales to be placed in a position that prevents them from rolling down hill. “When they’re operating in hilly area, a lot of guys end up backing their balers up and trying to get it in a position so it doesn’t role down the hill. We actually have this integrated into the machine. It’s almost as if we put a level on the machine. It turns until it is level and then it dumps the bale. It places the bales exactly where you need them on the hillside so they don’t roll down,” Vrieze explains.

In addition to the automatic quarter turn, Vermeer has also integrated additional automation in the ZR5. “If you think about a normal baling cycle, when the baler starts tying the bale, the operators needs to hit the clutch and take it out of gear. Then he opens the tailgate and then closes the tailgate. Then he pushes the clutch back in and puts it back into gear and lets the clutch out,” says Vrieze.

“We believe the machine will out live the baler itself,” says Josh Vrieze, product manager of Forage Solutions for Vermeer Corp., about the company’s new ZR5 self-propelled round baler.

This recently launched new concept in baling hay has been designed to easily replace the baler unit. “The baler load and unload feature is another innovation we’ve built in to this unit,” says Vrieze. “We can actually unload the baler from the machine and load a new baler within a minute. We believe this will improve the ease of maintenance and allow for replacing the baler when it’s worn out without replacing the whole machine.”

Another significant feature of Vermeer’s ZR5 self-propelled baler is that the baler itself can be changed out in a matter of minutes. “We believe the machine will outlive the baler,” says Josh Vrieze, product manager, Forage Solutions. This will allow replacing only the baler without re-investing in the entire machine.

Vermeer Unveils the Next Big Leap in Baling Technology